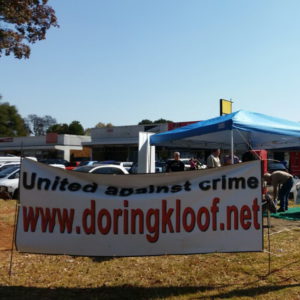 Here are the crime incidents that have occurred in the last ten days.  Please note that we are experiencing the expected upsurge in crime that occurs every year at this time – the so-called criminals’ “Christmas Shopping”.  Residents are asked to be extra vigilant for the next month or so and to immediately report any observed criminal act.  Do this using the radio (and not on Whatsapp or by phoning a friend.)   It is only when we as residents go out and confront a potential criminal act that we can make Doringkloof safe.   And it is only the radio that gives us the quickest reaction time.

23 October    At 17:00 Russell reported that a Doringkloof resident had been assaulted in the park-area on the corner of Lupin and Botha Ave An informal trader stationed here sells snacks and single cigarettes and the purchaser was assaulted by 2 men after he had bought a single smoke.  The suspects took his cell-phone and everything else he had with him. The suspects then ran across Botha Ave into the mine area closest to the N1 on-ramp.

24 October   At 07:42 Simon called in that as a mom was dropping off her kids at Kiewiets Nest nursery school in Mahonie Street, the car door was opened by a suspect when she tried to lock the car.  As a result, the car would not lock.  No report as to whether anything was stolen.

26 October At 11:20 2 bravo males in a grey medium-sized sedan lifted the electric sliding gate at a residence in Koranna aVE. The children in the property saw them and ran into the house and pressed the panic button. Monitor Net arrived.  However, no registration number or make/model was available.   Meanwhile, the children and the dog were all safe inside the house. The parents who had popped out to the Mall returned immediately when the children called them back.  No further details.

28 October  At 08:30 Thea reported a dog poisoning incident at around 03:30 at two residences in Koranna Ave. This occurred after an attempted break-in at 99 Koranna on Saturday. Residents are warned to be on the lookout for anything dropped into their property consisting of either mielie meal (pap) or mince.   A four-minute lookout was held and 16 residents reported that their streets were clear.

29 October   At about 16:00 a man reported that he had been robbed of a cell-phone at the corner of Kiaat and Palm. The victim wanted to know if any CCTV footage was available and he was provided with the cell-phone number of a resident in Palm Street. No further information was available at the time.