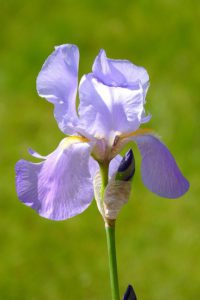 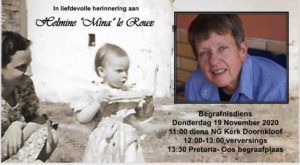 It is with great sadness that we heard Helmine had died in her sleep in the early hours of Friday morning 6th November.

Helmine was an exceptional person. She had fixed views on everything and was not afraid to voice them in writing, especially to newspapers!

She had an amazing vocabulary of wonderful Afrikaans words most of which I had never heard. Only last week she taught me a new word – “RUIMSKOOTS” – it means “IN

I cannot remember exactly when I met Helmine. It must have been early in 2002 when I was invited by Christa Spoelstra to attend a security meeting at Willem Potgieter’s house in Mahonie Street. There were about 4 or 5 of us there.

We were waiting for one person – Helmine le Roux. She arrived a few minutes later carrying her handbag under her arm and mumbling. I caught some of it : “My man is so bedonnerd soos ‘n pofadder in ‘n koekblik!” I looked at this little person and liked her immediately!

This meeting in 2002 was the start of our Neighbourhood Watch. Chris Angles had established patrols in the Northern parts and I had put patrolling guards in place in the centre, just South of New Fatima Cafe.

Helmine was appointed Chairman. She had all the right ideas -street captains and patrols – but we didn’t have the tools. This would only happen when Whatsapp was invented in 2009.

The crime was bad and the Spruit was being used by criminals as an escape route. Many people were hi-jacked in front of their entrances.

The Neighbourhood Watch, using 2-way radios, was started in 2006. This included Coordinators to man the radios 24/7. Helmine jumped to the challenge and did her Monday morning stints from January 2007.

That same year we noticed trees were being removed from the Spruit. Helmine did some enquiries and informed us that Nature Conservation was removing alien trees and would be planting indigenous trees.

She also saw that the 50 + yr old blue gum at the Jasper Bridge was going to be cut down. This was too much for Helmine and she rushed to the tree’s defence, threatening to chain herself to it and to shoot Anton (Nature Conservation) with her husband’s shotgun.

Exactly what happened, I don’t know, but this brought about a meeting between Helmine, Natalie Vos (Functional Head NC Irene) and me. As we approached Natalie’s office I can remember Helmine muttering about how she was going to tell Natalie a few things …

Well, Natalie was so nice that Helmine forgot everything and we agreed to start a Friends Group in partnership with Department Nature Conservation, City of Tshwane.

I was elected Chairman and Helmine the secretary during a tea at Cherry Berry attended by about 40 people including Clrs Christa Spoelstra & Dr Clive Napier and Marion Mengell (Friends Groups Coordinator for WESSA) in July 2008.

This was the start of a wonderful friendship with committee members consisting of Natalie Vos, Mike Correia, (both NC) and Doringkloof residents: Margie Rutsch, Tinie Ferreira, Nic Claassen, Janet Els, and later Penny Dekenah and Hendrik du Toit. When Helmine retired, Thea J van Vuuren took over the job of secretary. I am told that Thea and Helmine kept in touch daily for support and to check on each other.

We built up a friendship over the years that have overlooked all the differences we had. And there were many – from religion to politics and everything in between.

Helmine was genuine – no ifs and buts or false pretences. She was who she was and everyone loved her. She had a tremendous sense of humour and we shared many jokes.

We will miss her. Regards,