PLENTY of fun at our resent Doringkloof Village Market

PLENTY of fun, along with delightful eats, bargain buys and a great community spirit were among the pleasures on offer when the first ever Doringkloof Village Market was held on Women’s Day, last Tuesday.

The event, which also featured great music, took place on the grounds and the premises of the Filadelfia Gemeente in Koranna Avenue, Doringkloof. 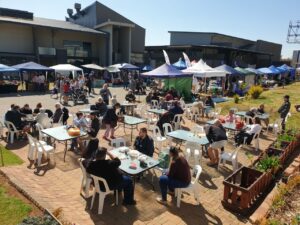 It ran from 9am until 3pm and more than 80 exhibitors were on hand to offer their wares and assorted goodies to the several hundreds of local residents who turned up to support this fantastic day (a fine smattering of beautiful dogs accompanied their owners).

It was organised, in the main, by the good folk of the Doringkloof Residents Association and the Doringkloof Neighbourhood Watch. They both had stalls at which people could learn more about their tireless efforts which make Doringkloof such a pleasant area to live in.

Thanks has to go, in particular to Iaan, and Lanie who, along with others (Delveen, Fransie, Carol), helped to make the day such a huge success. It was indeed an opportunity to experience the true unity of a community working and living together.

Personally, to me one of the many highlights was the presence of a range of local singers who, with great backing tracks, pulled out all the stops to perform several rock ‘n roll favourites.

Delvine did a great job in making the young performers feel at ease and she ran the great soundtrack with aplomb.

The singers set plenty of feet a-tapping and those present cheered on their every move. They left no one in doubt with regards to the plenty of talent on offer in our delightful suburb… it’s funky Doringkloof indeed!!

Even the weather played along and the entire day was blessed in glorious sunshine.

Kudos to all the organisers, and the good folk at the Gemeente. May the Doringkloof Village Market become an annual event for the entire community to enjoy.